Interview with writer and cartoonist John McNamee of Pie Comic. 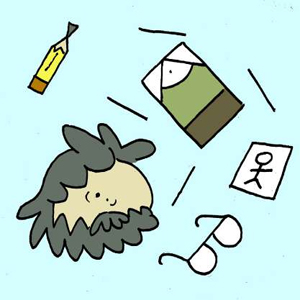 John McNamee is a writer and cartoonist living in Los Angeles. His clients include The New Yorker, Cartoon Network, Mad Magazine, The Onion, and Clickhole. He is the writer and artist behind the long-running comic strip Pie Comic.

Please tell us about your work.

Drawing comics is my main passion, but I also do gag cartoons, political cartoons, write jokes, sketches, and the occasional TV show.

Can you give some details on the comedy writing you do?

I started out doing mostly sketch comedy. I studied that at the UCB theater. Since then I’ve branched out into more narrative work.

How did you get started as a comedy writer?

I started out at the Onion News Network. It was a real dream gig. They’d take an idea of mine and make it funnier than I thought it could be. Since then I’ve done work for Clickhole, MTV, Cartoon Network, The New Yorker, and Mad Magazine. As far as getting new clients, I find my greatest asset is a total lack of shame. I’ll email, DM, or call anyone trying to get my foot in the door. The worst thing that can happen is someone says no, and you get used to that pretty quick.

Please tell us about your comic?

What does it take to create a successful comic?

Craft, style, and a message. Craft is what you practice and it makes the comic readable. Your style makes you stand out and lets people know who you are. Your message is why they’ll read you over and over. It’s connecting with the reader.

Do your comics bring a lot of traffic and sales to your Society6 store?

I should be better about promoting and making new merch. I don’t have the businessman mindset. It’s way less fun than comics.

Please tell us about your Patreon patrons?

My patrons are great. I offer the higher tier ones drawings of themselves riding a mythical animal of their choice. Way too many pick Chinese dragons.

Do you think Patreon is going to become an increasingly important income source for artists?

I know a lot of artists who do very well on Patreon.

Do you have any advice for artists interested in creating their own comic?

Make a comic every day. It doesn’t matter if it’s good or bad. Just do one. If you keep working, you’ll find out what comics you want to be making, and you’ll get a lot better at making them.

Get more artist interviews by signing up for the email list! Go to Online Art Classes.