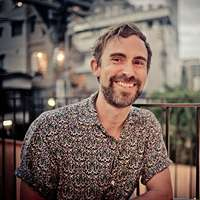 Since 2006 Chris has been a hobo entrepreneur having lived in Tokyo, Berlin, London and a few spots in South East Asia. In that time his achievements of note:

• Founder of ArtWeb.com webhosting platform and gallery for over 30,000 artists
• Co-founder of the media company Fast Train Limited, whose flagship site is TokyoCheapo.com, a popular Tokyo blog with over a million monthly page views
• Podcast co-host and writer on HoboCEO.com
• Occassional speaker and occassional headstands (published on hbm.jp)
• Advisor to the fintech start up KYC-chain

Please tell us about what you do?

To earn my keep, I work as a tech entrepreneur. My first successful business I founded was ArtWeb.com, a leading web hosting and promotion service for artists, which has been running for over 10 years now. We have over 30,000 registered artists and over 300,000 works of art in our online gallery.

My second business of note is a network of travel websites, the most popular are TokyoCheapo.com and JapanCheapo (with LondonCheapo up and coming). I started this enterprise almost 5 years ago, and quite quickly it’s grown to serving about 1 million page views per month.

What is your art background?

Sadly, for the last 10 years, I’ve been preoccupied with running a business (or two), so my current creative efforts are confined to the task of photoshopping laser cats into some of the images for Tokyo Cheapo (you can see some examples here). 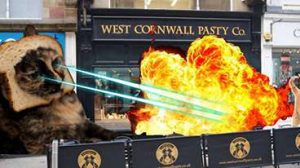 However once upon a time I was a musician. I used to write, record and perform music, having been in several different bands and a variety of styles, from jazz, to world music to what could only be described as “perfomance art”.

I was in a reggae band, we played to a crowd of about 4000, supporting Misty in Roots, plus we had a ~50,000GBP record deal on the table. This was never signed and we had a very messy break up shortly afterwards!

I also recorded an EP for the acoustic duo “Magic Baby”, with myself and the very talented song writer Sharon Lewis.

And last, but not least, the last band I was in was flippantly called “Omnivore Treacle”. It was an improvisation quartet, and each member of the band had one thing in common – we were all bonkers. The songs we recorded ranged from making barking noises, a pseudo classical string quartet to heavy metal.

I tell myself one day I’ll pick up the guitar again, relearn bebop jazz and perform in poorly lit dingy basements to tiny audiences of the few remaining jazz heads out there.

What inspired you to start ArtWeb?

My father worked at IBM and my Mother was an artist, singer and art teacher, so running a technology platform for artists is in my genes! But more specifically, I was working as a freelance web designer and had a lot of artist friends. After setting up a few websites for my friends, I quickly realised there was an opportunity to create a website builder dedicated for artists, and so ArtWeb was born.

I started small. I wrote all the code on my own and contacted a number of local artists by snail mail and phone. To my encouragement, I earned a few customers almost straight away, so I devoted all my time to growing the user base and improving the system. At the start, I did a lot of “old skool” marketing like visiting exhibitions and giving out flyers, sponsoring or speaking at art events. I also used my quirky acrobatic hobby of standing on my head at every opportunity – on flyers and at events.

Here’s a photo of me (despite having a broken ankle) posing for a photo at our first major expo show: 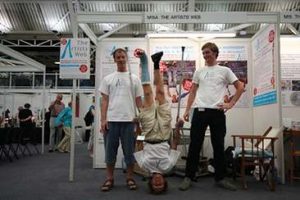 ArtWeb is specifically designed for artists, moreover it has been honed and polished over more than 10 years to better fit the needs of an artist. It is simple to use, fast and doesn’t have any unnecessary extra features. Plus ArtWeb is much more than just a website builder! We have a large gallery on our main website where we feature hundreds
of thousands of our members’ artwork, Artweb has a strong brand name in the online art world, with tens of thousands of people on our network every day, across artweb.com users’ own websites, our newsletter and our popular social media accounts.

WordPress, despite being so popular is a general tool that tries to suit the needs of everyone – ecommerce, blogging, brochure websites, community forums, ebook sales, yoga studios, digital downloads. But as a result of this popularity and wide use cases, it comes bloated with a huge amount of code and features, lacks speciality and suffers far more security attacks, etc.

You have a largely location independent lifestyle,
can you please explain where you live and where
you travel to on a regular basis?

As a form of gratuitous self aggrandisement, I like to think of myself as one of the original location independents – since I’ve been doing it over 10 years, and before Tim Ferris published the “4 Hour Work Week”.

Initially, I liked the idea of living in other developed countries, so I relocated to Tokyo about 10 years ago. After a few years mainly in Tokyo, I moved to London, then Berlin and then began moving between South East Asia, Japan and Europe seasonally every year. If I had to pick favourites, I’d say Berlin, Chiang Mai and Tokyo – these three cities all complement each other very well, plus they are great in their own right.

Do you meet many digital nomad artists?

So really it depends on the category of artist as to how viable a location independent worklife is.

What are the advantages of being a nomadic
artistic?

Apart from the great lifestyle, there are huge amounts of inspiration available as you travel. Travel is perhaps the easiest way to open your mind – being far away from home you, have to adapt to new circumstances and learn so much.

So there is great inspiration, both in terms of your surroundings – what you see, hear, taste and smell, and what your learn about yourself and other people around the world.

I think Tokyo is hard city to live as an artist. There’s neither a strong culture of buying artwork, nor is there much government support and funding of the arts. Unless you have a benefactor, you’ll have to quickly find direct commercialisation of your art (like as a commercial illustrator or photographer), or the dreaded “day job”.

On the positive side, it’s a place filled with interesting sights, scenes, people and places, plus you can live here quite cheaply if you’re willing to live a simple life. And as it’s such a gigantic city, there are many other artists, some very successful, that you can be inspired by and learn from.

Is Japan a good place to move to as an artist?

Although Tokyo is quite a challenging city, there’s much more to Japan than just one city!

Next to Tokyo is Yokohama, that has a up and coming young art scene (we wrote about it here ). Also, there are some artist residency programs in Japan, here’s a website with a list of some available to people from overseas .

And I’ve met quite a number of artists who live a simple life in smaller cities or the countryside. Life in Japan away from the big cities can be very cheap, but still have all the benefits of a modern developed country. For example, I’ve met a number of artists in the small sleepy town and harbour Onomichi. In fact, the city is experiencing somewhat of a renaissance, with many arty cafes and venues popping up. (See my article here .)

Get more artist interviews by signing up for the email list! Go to Online Art Classes.